I exhibited a range of hand-dyed, handwoven silk textiles in various formats at the 35th American Craft Exposition, where my work was recognized with the Show Directors' Award..
http://americancraftexpo.org/the-show/

93rd Kokuten
May 2019
The National Arts Center
Tokyo, Japan
I exhibited a new, full-length wall hanging at the 93rd Kokuten in Tokyo in May.  Mine is the furthest left piece in the fourth photo from the top (on the left) here:
https://kokuten.com/33411
​
Smithsonian Craft Show 2019
April 24-28, 2019
Washington DC
​I am honored to have been invited once again to participate in the Smithsonian Craft Show in Washington, DC.  The show will once again be held in the atrium of the National Building Museum.
smithsoniancraftshow.org/
​
​CraftBoston Holiday, December 2018
December 14-16, 2018
Boston, MA
I will be exhibiting again at CraftBoston Holiday again this year at the Hynes Convention Center.  Please come visit with me there.
www.societyofcrafts.org/craftboston
​
American Craft Council, San Francisco.
August 3-5, 2018.
​craftcouncil.org/show/artist/chie-hitchner?show=85860

​
LUX Center for the Arts
Solo Show, May 2018
Lincoln, Nebraska
The show received generous support from the Japan Foundation of New York that made possible educational workshops on dyeing and weaving..
https://www.luxcenter.org/exhibitions/chie-hitchner

​
92nd Kokuten
May 2018
Tokyo, Japan
Learn about this year's Kokuten and about the history of Kokuten!
kokuten.com/whatisinenglish

Chie was honored that her work was recognized as a "rare craft" that is being maintained at a high level of excellence.   Here the award is being announced at the Show by Lorne Cousin, Ambassador of The Balvenie US.
Awarded "Best in Show" at CraftBoston Holiday
December 15, 2017

At the opening ceremony of CraftBoston Holiday Craft Show, the judges awarded their Best in Show award to Chie's worrk.   societyofcrafts.org

At the ACC San Francisco show held August 4th through 6th, 2017, at the Fort Mason Center for Arts & Culture, Chie was one of five recipients of an Award of Excellence for the quality of her work.  Chie was the only fiber artist receiving the award.  You can read more about these awards  here. 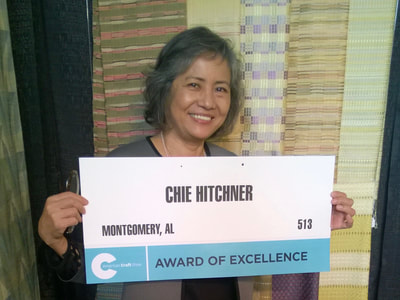 91st KOKUTEN Exhibition, Tokyo Japan, May 3~15, 2017
The National Art Center, Tokyo, Japan.
https://kokuten.com/4690
Philadelphia Museum of Art Craft Show, November 2016
The Philadelphia show was a wonderful experience.  A number of visitors from the Philadelphia area recounted their own personal knowledge and relationships with Philadelphia's now-defunct textile industry.  It seems that an area in west Philly had a concentration of textile plants.  At the show, I exhibited both wall tapestries and scarves.  Each one was 100% silk and was dyed in my studio with natural material dyes (with one single exception, the chemical blue dye used in a particular scarf).
​​
90th KOKUTEN: 4/27 to 5/9 2016
The National Art Center, Tokyo in Japan


Honoring the Future Partners With Smithsonian Craft Show to Announce Sustainability Prize
http://www.honoringthefuture.org/smithsonian-craft-show/
Chie is one of eighteen artists vying for the award, recognizing artists whose work inspires a sutainable response to climate change.